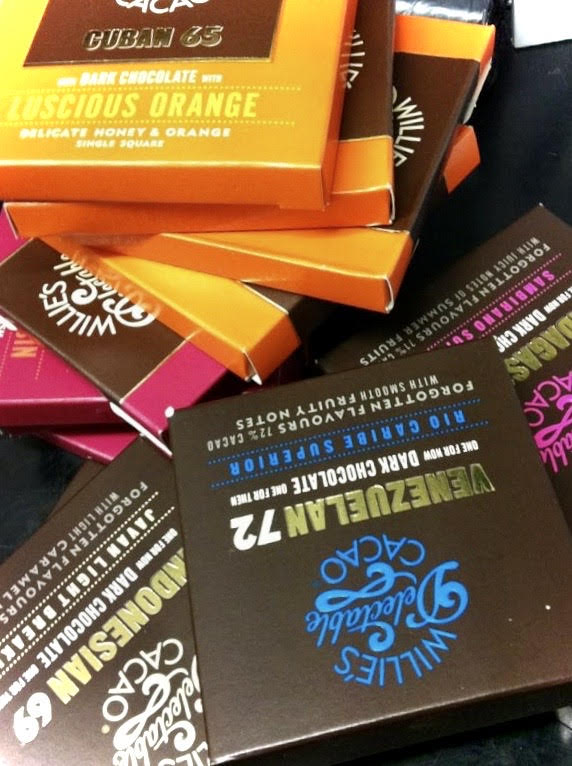 Like many others, as a child I was captivated by Roald Dahl’s popular book, ‘Charlie and The Chocolate Factory’ and would dream of the story being a reality, as I’m sure many children still do today!

Back in 2008, I watched a documentary called, ‘Willie’s Wonky Chocolate Factory and The Chocolate Revolution’ following Willie Harcourt-Cooze and his journey from Devon to Venezuela on a mission to create the world’s best chocolate. I went on my own mission to track down some of his cacao blocks that he’d launched, purchased his first recipe book and opened up a whole new world of cooking with cacao, which I’ve never looked back from.

What first blew me away was the dedication of this man, with a vision to create something of high quality and incredible taste, made the old fashioned way and a determination to change some people’s perception of dark chocolate, by offering something unique. He had himself, lived in Venezuela for many years, a place that he holds dear in his heart, and he also has his own cacao farm over there. In Devon, his current home, he had set up a chocolate factory, tracking down antique machines in order to produce his chocolate in a traditional way that was important to him to stick to. Being both the supplier and the producer, he maintains control of the quality of his products. He had quite an inspirational battle in those early days to get to where is now – his chocolate and cacao products are popular all over the world and deservedly so!

His passion and sincerity shines through and his products are second to none. His recipe books are packed with amazing recipes, both savoury and sweet, of which I’ve made many over the years. As someone who suffers with food allergies and intolerances, with other family members also in the same boat, what I found was so many recipes didn’t use traditional ingredients and were therefore naturally free from certain products. For the others that did, substitutes worked well, were easy to switch and you cannot tell because the taste isn’t compromised. His hot chocolate recipe – pure cacao, sugar and water, is hands down, THE best hot chocolate I have ever tasted, without all the added extras you find in shop-bought powders and a heck of a lot less sugar. In fact, everything I’ve made from his books is each the best-tasting I’ve had of it’s kind, from mince pies to chocolate cake, melt in the middle puddings to cookies and confectionery.

What his books also offer is a pictorial and written education on the history and origin of chocolate and his journey to discovering it. Reading about it in his books made me want to research it and learn more, which also lead to fascinating visit to a chocolate factory in Spain about seven years ago, which was free to do but rich with a background presentation on the history of the cacao bean.

First used as a food way back around 350BC, it was one of the most desired foods of Mesoamerica and was consumed by the Olmec, Maya, and Aztec civilizations, amongst others. It didn’t arrive in Europe until the 16th century!

Chocolate is made from the beans of cacao pods from the Theobroma cacao tree. There were, in fact, four varieties of cacao bean (cacahuatl, as the Aztecs knew them) and their term for the chocolate drink – xocolatl – is probably the origin of the word chocolate. As we know it today, chocolate (that we eat) is sweetened with sugar but in ancient times, the naturally bitter of pure cacao could have been flavoured by adding maize, vanilla, flowers, ground chilli peppers, herbs, honey, or fermented agave sap. Because it also contains caffeine, it acted as a stimulant, much as caffeine still does today.

If you would be interested in trying some of these recipes, feel free to drop me a message and I will happily send you a recipe! Everything is also easily accessible online. All I can say is that it’s opened up a whole new world of cooking with chocolate for me, I would highly recommend giving it a try – a more natural, healthier and tastiier way to enjoy chocolate treats!

previousCreativity in education for future generations